Muammar Gaddafi said the vaccine makers would create a virus and a vaccine to profit.

Joe Imbriano says Wi-Fi vibrates at frequency that starts to spin  water molecules.  5G at 60 Gigahertz starts to spin oxygen molecules our blood needs to uptake to breathe.  These are going on old and additional new lightpoles, on bus stops, buildings, are being added to 4G towers and are being hung on new low hanging twisted bundles of black cable over side walks, cross walks and through your yards.

I previously watched video connecting this lab to investors. 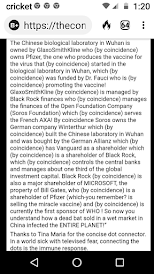 FDA allowing minor ingredient changes without label disclosure, using pandemic as excuse.  During 2020 some farmers were told transport was contaminated and to dump their produce.  Wendys served 1/2 meat, 1/2 pea protein burgers without disclosing this when their meat was short.  I realize insects and cockroaches are sources of protein.  It is concerning that these continue to be drenched with poisons rather than turn ants away with black tea leaves, block their entry access and eliminate what cockroaches come indoors for which is food, paper and water.

Set to be approved in the EU are edible insects.  US, Canada, Japan, India and France want to sell cockroach milk.  __icefarmer.com 1-26-21

Eucalyptus, oregano and mint oil all repel mosquitos.  Long sleeves, pants, socks and mosquito netting block mosquitos and removing standing water eliminates a place for their larvae to be laid and hatched.

It is not okay for Oxitec to talk our cities into letting them release insects they infect with Walbachia bacteria that cause sterility that us humans would otherwise not come in contact with.  Further they claim they pick out the females they are breeding in warehouses and don't release them.T

This is not the 1st effort to create food shortage.  San Joaquin farmers were told a smelt had to be saved and were denied water in 2009 that later they found was simply let to run out to the ocean.

Rocco Galati is suing Canadian government, Prime Minister Trudeau and health ministers for violation of rights of citizens, using broadcasting to silence and censor medical and science experts trying to address that these measures they claim are to stop a virus are destroying health and the economy.  Mr. Galati says these doctors and scientists are world experts but are not trained to fight political measures designed to affect economic and nation state destruction.  Listen to or download podcast.

Fall Of The Republic is the Rise of the Corporate Wake

This will Happen If You Take  Vaccines Dr. Suzanne Humpfries. https://youtu.be/4k7jlVEtqrU

2019 Vaccine conference. WHO Caught On Tape Admitting Vaccines Are Not Safe

Association Of American Physicians And Surgeons Sounds Off On Face Masks

U.S. has cooperative bio-engagement programs and dual use technology they get Universities to develop then use for bio terror like weaponized insects.  Harry Vox tells who profits most from from terror futures marked put options before 911 and what covid is in Paul Derienzo interview.

More voxnews to educate yourself

Video link below of lockdown protest in Minnesota with inspiring address by Michael Matt outside governors mansion.

Dr. Palevsky explains to Connecticut State Legislature how vaccine manufacturers are not doing double blind placebo studies and that nano and polysorbate are destroying cell membranes, mitochondria and brain matter leading to inflamatory and auto-immune diseases.

Vaccine maker Butantan in Brazil began developing a vaccine for the microcephaly outbreak in 2014 while admitting they didn't even know what caused it.  They blamed mosquitos for being infected with Zika as did Oxitec now owned by Intrexon.  Oxitec and Mosquitomate tried to profit by incubating masses of mosquitos and releasing them in the wild.  Oxitec claimed to genetically alter these mosquitos to be and cause infertility in offspring. They released millions by the truckload in Fresno, California in 2017 and claimed they needed to release more and later to work.

Mosquito Mate infects mosquitos with sterility causing bacteria Wolbachia.  Humans have never been exposed to Wolbachia but will be as these mosquitos are surviving in the wild and the creator, professor Stephen Dobson at U of Kentucky never tested the saliva of these infected mosquitos.  He now has a pest control company in Lexington but was trying to convince cities they had a Zika carrying mosquito infestation and would solve it by releasing millions of his Wolbachia infected ones.

Since the Aedes Aegypti mosquito species wasn't causing zika anywhere else, Argentinian doctors looked at how the Brazilian state of Purnambuco had put pyriproxyfen in public drinking water to kill mosquito larva.  Zika did not cause women to give birth to babies with shrunken brains.

It is said that after DDT which causes paralysis and was sprayed directly on children as an insect repellant, a new disease called polio was blamed and a vaccine was created to eradicate polio.  Childhood paralysis that was blamed on polio disappeared as soon as the use of DDT ended.

Glyphosate is in vaccines. Zen Honeycutt's own Sons health improved after she learned about and removed glyphosate from their diets.  What it does is combine with the other toxic ingredients and allows them to cross into the blood brain barrier.  Vaccines began causing alot of health problems when glyphosate was added in the vaccines.  Start video at 9 mins

Muammar Gaddafi said the vaccine makers would create a virus and a vaccine to profit. https://www.bitchute.com/video/z1RgHUDrNOx5 /